Here we go again! Another Thursday, another all-out race! This week we hammered our way around 2 laps of the Richmond UCI Course which has a deceptively easy profile of:

About half the course is flat, but that is more than made up for by the back half of the course which features, in quick succession: Libby Hill, 23rd Street Climb, and the Governor Street Climb. The first two of these are max 1 minute and 30 second effort climbs, respectively. Governor Street Climb is about 2 minutes at race pace with a steep kick at the bottom and a long false flat drag to the start/finish line.

As Zwift and zwiftpower.com are wont to do, there have been more format changes this week…! After much community push-back, the A and A+ categories have been rolled back together for this league. While this doesn’t much affect our team’s (Power Dropouts) rider-category allocation since we weren’t fielding an A squad, it did mean that the teams that didn’t field four riders in A+ last week got their A and A+ results lumped together. After all was said and done, we were bumped down to 11/43. Here are the standings updated from last week: 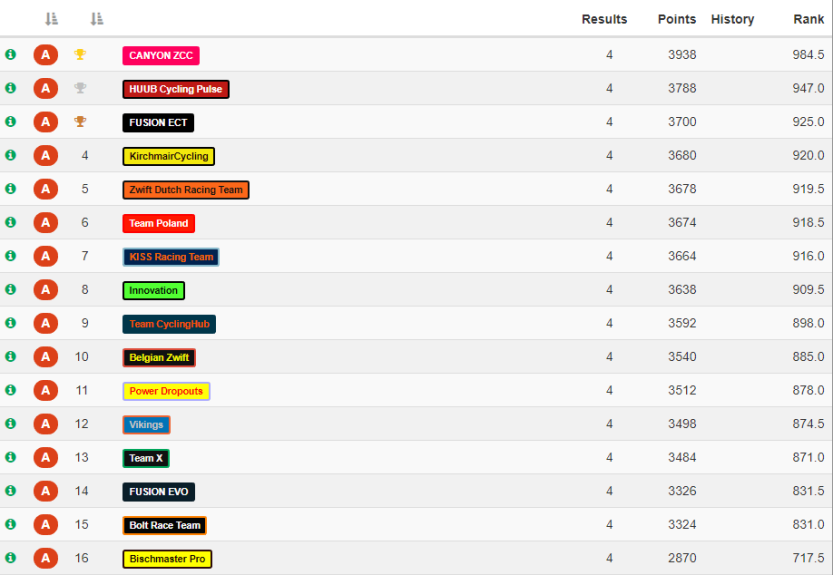 -27:00: Getting into the pens extra early this week but it’s still filling up quickly. I come in with a feather power-up which I’ll hold onto through the first few banners until we hit the hills

-10:00: Our team organization improves every week! We have the full A squad (myself, Oliver, Mike, Hal, and Dean) together on voice chat along with some teammates racing other categories.

-5:00: We notice that, while the turnout is about the same, we’re not seeing quite as many big names. Notably a lot of DRAFT guys are missing as well as our proclaimed rivals, Wahoo CyclingHub.

12:00: Nothing of interest has really happened at this point. All five of us are tucked away safely inside the massive front pack of 150 riders. The pace has been solidly sweet-spot/threshold for us but steadily dropping as the hills loom closer.

14:20: None other than the Poison Dart Frog himself (Leandro Messineo) kicks off the attacking leading into the base of Libby Hill. He goes well into the orange numbers. I’m sitting a bit farther back than I’d like (~70th) at this point, so I really can’t see what’s happening at the front (not the greatest positioning on my part)

15:25: Oliver has miraculously made the selection here. Our quick voice check-in has him at 14th – the tail of the leading group – Mike at 40th, myself and Dean around 60th, and Hal around 80th.

16:45: No reprieve. After a quick descent and two right-handers, we dig again and crest over the 23rd Street Climb. Oliver and Mike are together in the 2nd group on the road, Dean and I are in the 3rd group, and Hal is in the 4th group.

18:30: Another quick descent and we’re back at it again! Governor’s Street Climb! This is the spot to make up time on this course, everyone’s tired and you can usually see the group in front of you. I try to pull hard to bridge to Oliver and Mike.

20:00: CONES! CONES! CONES! The whole front group gets disqualified for being too good! If you complete the UCI Course in under 20min Zwift thinks you’re cheating and kicks you from the event. Just like that, 15 riders are just chopped off the front of the race. Oliver and Mike are now in the front group!

20:18: Cutting it a bit close, Dean and I roll over the start/finish line, tantalizingly close to Oliver and Mike’s group (who cut it even closer, completing the lap in 20:09). I’m trying to pull as hard as I can manage after that climb, but only managing 5.5w/kg and my heart rate hasn’t dropped below 175bpm since the start. Their group sits up and we catch back on

36:00: All is calm for 15 minutes as we cruise around at what should be on my high-end of zone 2. It takes a long time for my heart rate to finally drop back into the low 160s.

37:10: After another gruesome minute, we crest Libby Hill. Dean and I are still together and it sounds like Mike and Oliver are still together. Hal is valiantly chasing. About half of our group has been shelled out the back.

40:15: One final effort. The front has split again and Oliver is on the attack with a handful of guys. I can see Mike’s wheel just 8 seconds up the road. I muster an attack, but not strong enough to make the bridge.

40:55: Again! Pop the featherweight power-up and go. I want to make that bridge.

41:30: I’ve taken a couple riders with me. We hit the home stretch. Again, I try to sprint, manage about 600W this time but it’s too little too late. We pass by a few stragglers from Mike’s group, but he’s gone. I try to hold onto this effort to the line but one guy with an aero power-up gets around me.

43:00: Hal rolls in and we all jet-off to Watopia for the team cool-down

Without the front group of 15 riders, we all place a bit higher than we otherwise would’ve:

And the updated team standings are:

…still unreleased! This whole DQ (Cone of Shame/Pride) is quite the situation…we’ll see what sort of hijinks Zwift, zwiftpower, and KISS get up to to deal with the results and people’s qualms.

See you next Thursday for a nice break from climbing with some Innsbruckring!

Cheers and Ride on!