We took full advantage of our motel stay last night, eating up as much of the free breakfast as we could. Then, following a relaxing morning and pack-up, we rolled out to find the bike shop. The shop of our choice was a Cyclepath which, despite being under the same brand as the Cyclepath’s in Toronto, was stocked almost entirely as a mountain bike store. An hour of tinkering later, my bike was back on the road.

After lunch we set off for the Alberta/Saskatchewan border. It was smooth sailing until we got there when another storm was looming on the horizon. We hung out at the visitor’s center for a while and decided we’d call it a day at Maple Creek since the next 50km would be in the pouring rain. 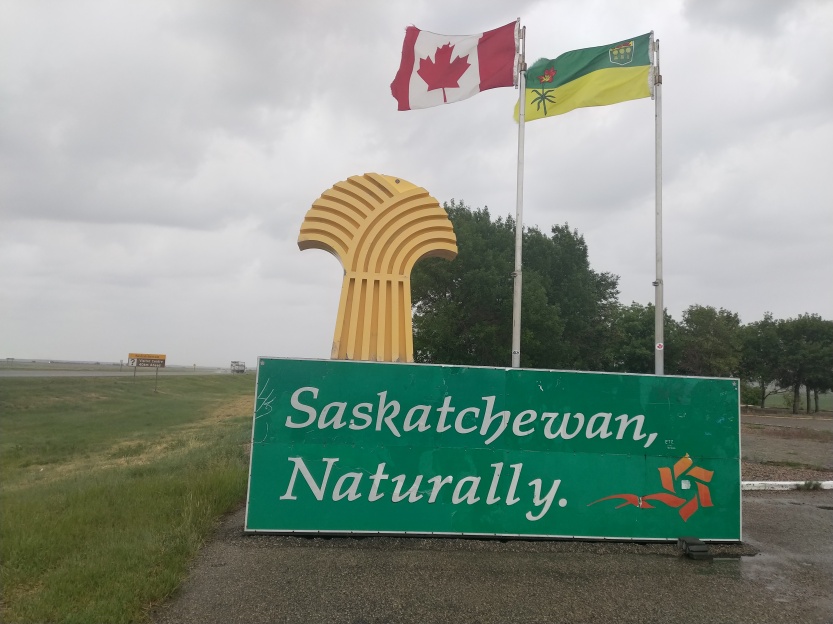 An hour and a half later, cold and thoroughly soaked, we rolled into a motel at Maple Creek. Since it was a Friday night, we hit up the local bar in town for some fun…. Just kidding, it was the closest place for food and we were starving.

Tomorrow we likely ride through the rain again as we head for Swift Current.

Today we were looking at another wet day. We procastinated heading out for the day as we talked to a couple that was also riding across the country and they were staying put for the day. The forecast was saying despite the rain, we’d have some pretty stiff cross/tail winds.

Before leaving Maple Creek we stopped by Home Hardware and grabbed some thick work gloves to keep the hands from getting too wet and cold. Unfortunately these gloves made it impossible to take pictures 😦

When we finally rolled out, the rain had mostly stopped but, indeed, the crosswind was strong; blowing pretty consistently at 40kph. 60km down the road we took a break hiding in a gas station restroom. Of course, then is when the rain decided to pick up. After pushing through an hour of rain we stopped for lunch and by the time we were back on the road the skies were looking much better.

As we drew nearer to Swift Current, it was clear we were riding between two storms heading east. The clouds above us literally opened up and we had our first glimpse of blue sky and sun in two days.

The ominous clouds in front of and behind us had us seek another motel out. This block has been pretty motel heavy with the rain and long days. Only one more day before we take another rest day though and tomorrow is looking beautiful!