With good winds and clear skies on the block for today, we were planning on going long and trying to push onto Regina instead of the original goal of Moose Jaw. What we didn’t expect is that the winds would be as good as they turned out to be. After rolling out of Swift Current shortly after 8:30am, we pounded out the first 100km sans-break in a little under 2 and a half hours, averaging just over 40kph; something that’s pretty much unheard of in Ontario, except for race-pace rides. 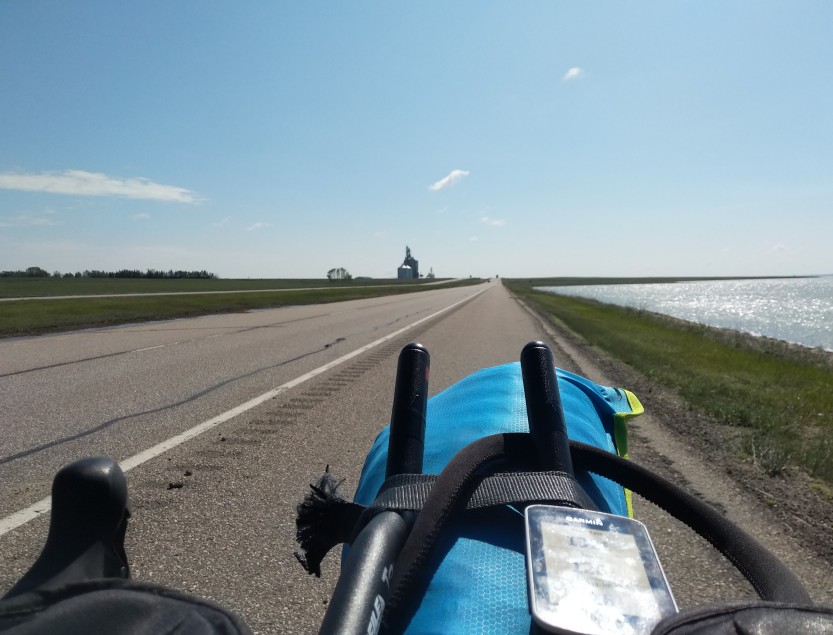 An hour or so after the first break we found a fellow cyclist by the side of the road. We stopped to make sure he was alright, as one does, and it turned out he is also on cross-country tour. Brian, our fellow traveller, is 71-years old and still riding 5-6 hours a day in his cross-country tour. We rode with him for the final 25km into Moose Jaw – his destination for the day – and had lunch together before we pushed on. With some sweet glasses equipped with a camera, he captured probably the only pictures we’ll get of Oliver and I riding together. 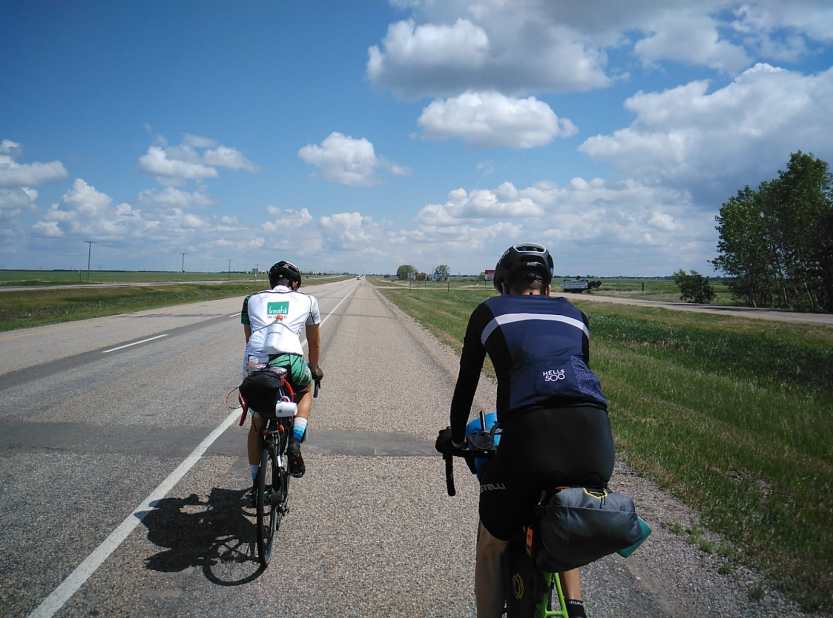 After lunch in Moose Jaw and parting ways with Brian, we (finally) got into the flat part of Saskatchewan. Until now, we were quite surprised at how hilly the west side of the province is. When we stopped for a direction check to the Airbnb, Oliver and I both managed to get flat rear tires in different ways (surely the probability of that is low?). While we were stopped to fix our tires, Oliver made sure to help fertilize the fields (apologies, he insisted I include this part). 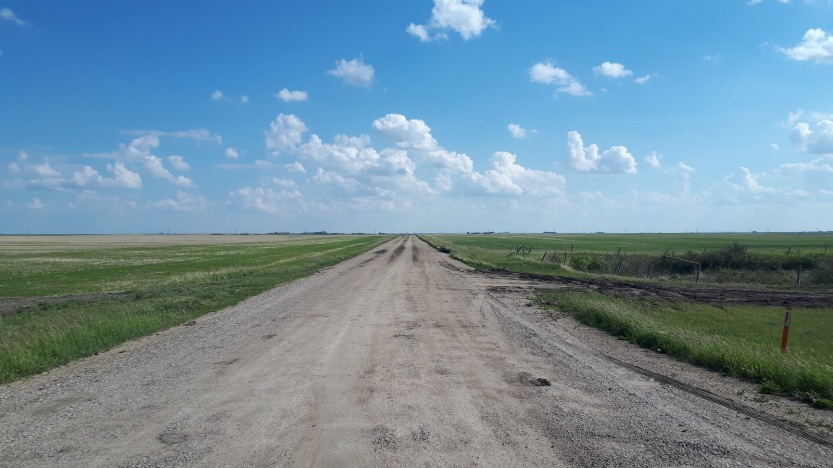 We eventually rolled into Regina and found out Airbnb. We ended up completing the 230km in 5h:45min, at just over 40kph. Despite the speedy few days, we were ready for a relaxing rest day.

Today was actually a relaxing rest day. We got groceries the evening before so we could just hangout in the morning before setting off into town later. Mainly, we wanted to go to a bike shop for a couple small fixes and go to the public library for Oliver’s Strava uploads. I think we found the friendliest bike shop in the province because we spent a good hour at Dutch Cycle Repair just chatting with the guys there about anything and everything cycling. Nice guys and really cool shop!

We saw some more of Regina including a nice park downtown, the legislative building, and the Rough Rider’s stadium! We made it home before the rain then spent the rest of the day relaxing and slowly getting ready for the next block. Oh, and we had some beers from towns we visited on our journey (Canmore and Swift Current). 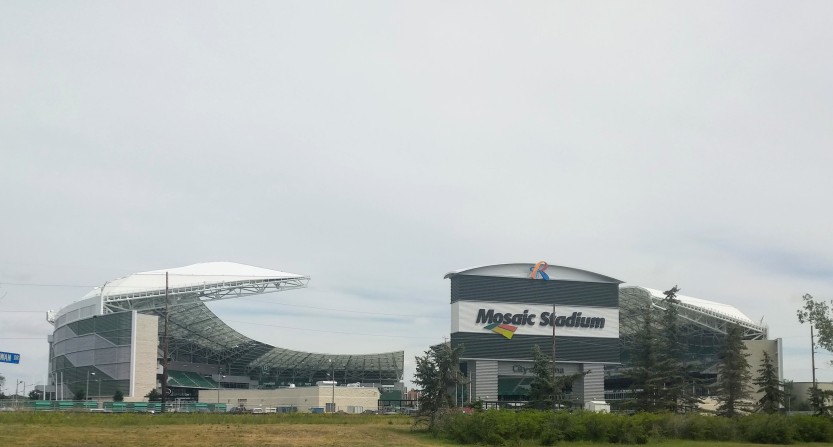 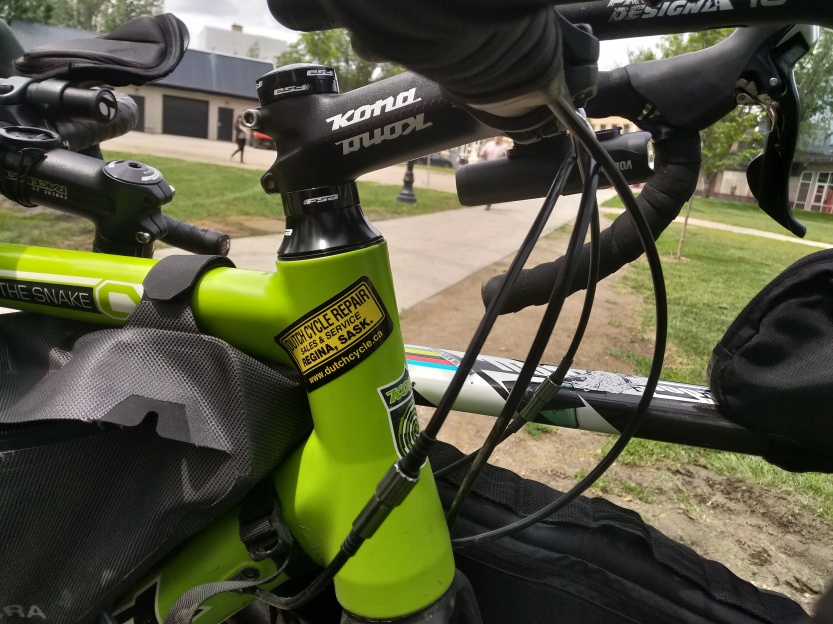 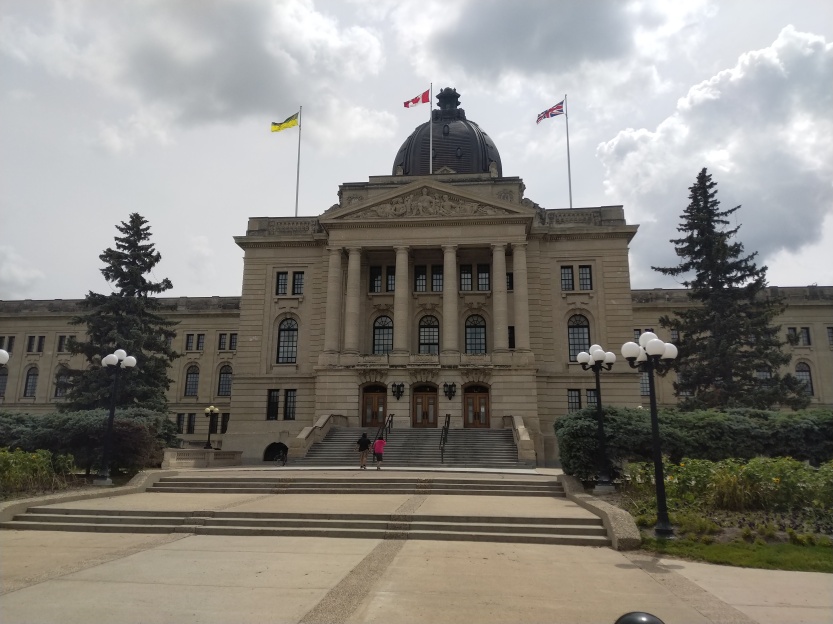 Tomorrow we set out on our next block, albeit a short one, to Winnipeg! With good winds early in the week we’ll probably cover most of the distance early then taper it off as the week goes on because nobody likes headwinds.