No plans were made for an early – or late – start today, but as soon as the sun got above the small hill we were next to, the tents quickly turned into saunas. A hasty pack-up and many double-takes from passing motorists later, we rolled out for probably our earliest start since the Coquihalla.

Second breakfast today was scavenged today from a local McDonalds 30km down the road; we’re suckers for their smoothies. After a relaxing and leisurely breakfast-turned-brunch, we set out on the open road again with a lunch spot in mind 60km down the road. This stretch of road saw us still relatively sheltered as we wound our way along the shore of the St. Lawrence through some very small and very French towns. The gently rolling hills and picturesque country-side brought back good memories of riding along the western shore last summer, though it is significantly more hilly there.

At lunch we reached another decision point in our route. I had originally planned to take us only 30km or so up the road to a small town before we turned inland tomorrow, but since we had gotten ahead of schedule yesterday we were pondering what farther destination we could reach today. The allure of a scenic coastal (shoral?) ride was enough to convince me that we should head for Riviere Du Loup. This would mean we would take a slightly different route inland tomorrow. Decision made, we set out. 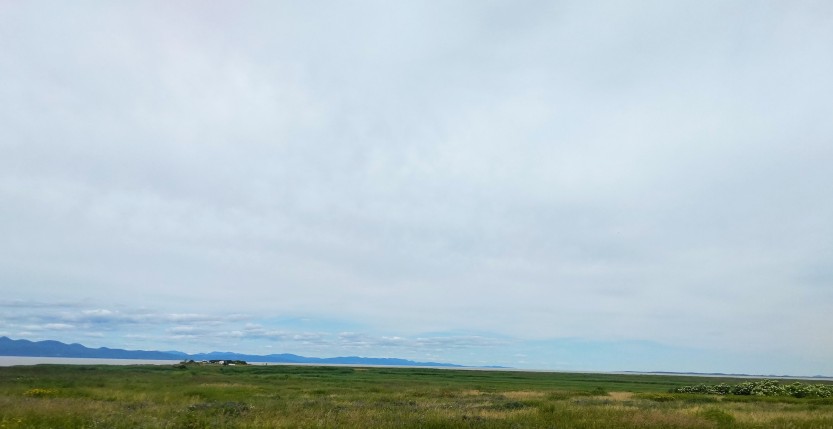 I regret nothing. It’s difficult to explain and pictures don’t do it justice, but this truly is one of the most beautiful places to ride in Canada. It’s certainly among my favourite. You don’t quite have the massive mountains of BC, you don’t quite have the wide-open sky and fields of the Prairies, and you don’t quite have the endless water of the Great Lakes, but through the combination of all three you get something greater than the sum of it’s parts. I loved riding the western coast, but I reckon I like the eastern shore even more now. The stiff tailwind certainly helps too 😏.

After an easy, breezy, beautiful 65km, we launched ourselves into Riviere Du Loup. Knowing there was a final climb into town, the pace picked up and some punches started flying. I tried to give Oliver a massive pull off the flats into the final steep section, but I got a bit too carried away and managed to drop him. Let the record show I rode Oliver off my wheel on the flats on July 22, 2019. This’ll be one of my crowning achievements of the trip!

We regrouped in town, stocked up at the grocery store, I ditched my leaky water bladder, then we headed into town for some seniors-time dinner – it was still well before 5pm. Despite having spent several days in Quebec by now, we only just made it to a local microbrewery. 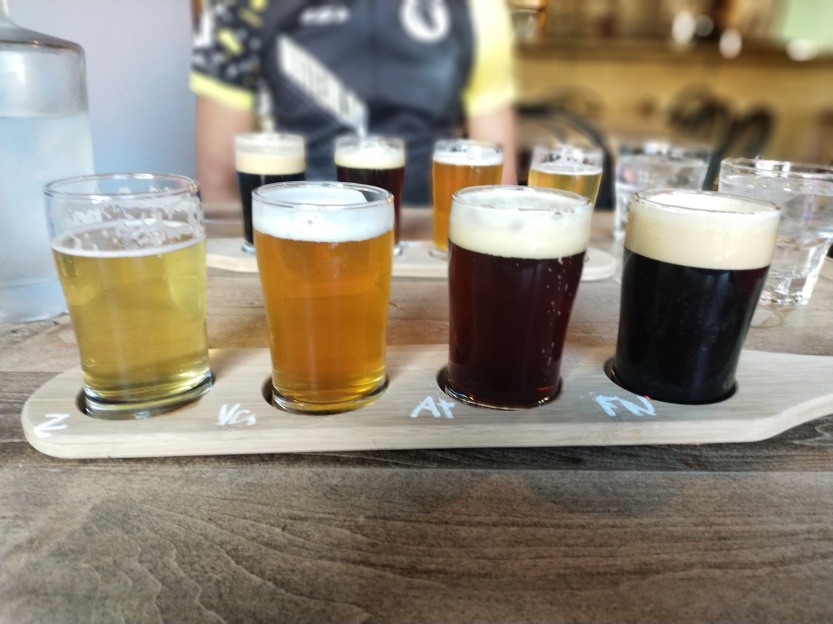 With dinner polished off before 6pm, we slowly made our way to a park in town to wash off in the river and find a place to sleep.

Tomorrow we leave Quebec and make our final time change as we cross into New Brunswick. The flat days are over; from here on in it’s rolling hills galore!

Along with lots of microbreweries in Quebec, there’s also no shortage of good bread. We thoroughly took advantage of this by having three croissants for breakfast…each. With faces stuffed full of delicious buttery dough, we slowly worked our way up the steep hills in town to the highway and bike path.

The Trans Canada picks up again here with a beautifully paved separated carriage way and massive shoulder. We planned on getting out of town though along a gravel bike trail that runs all the way from Riviere Du Loup to Edmundston. Since we need to cross over what I assume to be the Appalachian mountains, we hoped to take the gravel trail the meandering way up and then rip down the highway side into Edmundston.

Ten minutes into the bike trail and the gentle climb has started. Meant to be a pleasant recreational experience, the trail goes as straight and flat as possible, never going above a 3% gradient. The ever-present 1% grade is visually imperceptible, but you can just feel it in the legs and see it on your speedometer. The gentle gradients didn’t fail to get Oliver excited to climb though. 30 minutes into the climb and I’ve lost sight of him as he’s sped off into the distance to chase some KOM that may or may not exist (jokes on him, it doesn’t). I ease up and enjoy the quiet solitary ride. 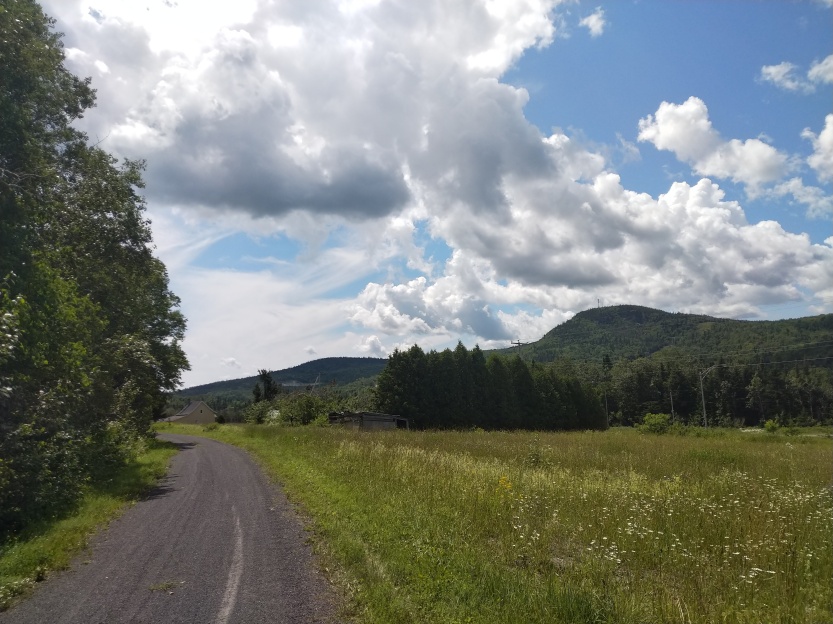 Nearly two hours into the trail and we’ve reached the top of the climb. Here, we regroup. 400m of elevation seems a bit paltry compared to the mountain passes of a few weeks ago but gaining 400m on what is essentially a false flat for 40km has still succeeded in doing it’s damage to Oliver. He lazily pedals his way down the other side of the climb – still only descending at a 1-3% gradient – while I take off, eager to make full use of the descent.

Not wanting to detour to a nearby town, we refuel at a highway-side McDonalds. I’m going to be quite happy to go back to my very infrequent eating of McDonald’s once this trip is done. We take a nice leisurely lunch while Oliver expresses in various ways how tired he is now. I think the Oliver doth protest too much.

The plan here was to hop on the highway for a speedy run into Edmundston but our plan is foiled; we’ve been forbidden from using that silky smooth paved shoulder. Back to the gravel trail. 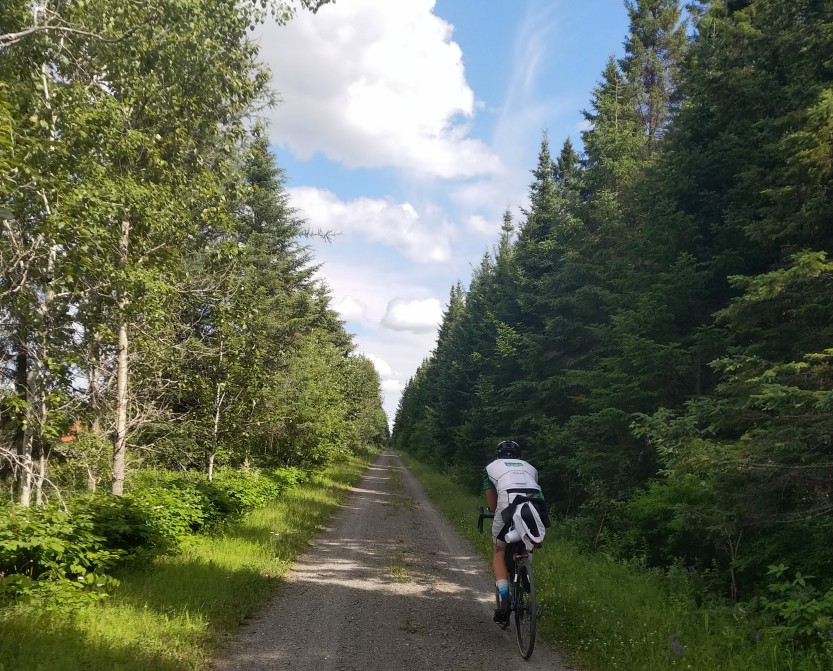 While the highway would’ve made for some fast riding, I’m rather happy we’ve opted for the trail as now it winds it’s way along a lake. I’d have taken some pictures of this sweet view but I wasn’t feeling brave enough to take one-handed pictures on this section of trail. You’ll have to take my word for it that it was lovely. Despite the gravel/dirt trail, we still found ourselves flying along it, making for one heck of a good time.

Eventually the trail straightened out as we left the lake behind and it became a near-straight shot to Edmundston. After a break at the New Brunswick border we found ourselves in town and slightly hurried as we’d lost an hour to the (final!) time change.

After a brief wash-off in the river, we found some super tasty lobster rolls for dinner. It’s a bit premature to be having seafood considering we’re barely in the Maritimes, but we figured we’d get the party started early.

Following dinner we found perhaps the most guerilla camping spot so far; in a field with plants just slightly taller than our tents.

The original plan had us taking a rest day tomorrow but the tailwind gods have other plans for us. With good wind tomorrow we’ll make our way further into New Brunswick and with a lack of places to stay, we’ll push on another day after that to get to Fredericton before taking our rest day.